‘Composite Assemblies’, an installation by architectural designer Clementine Blakemore, has been unveiled at an event to mark the UK Green Building Council’s (UKGBC) tenth anniversary. 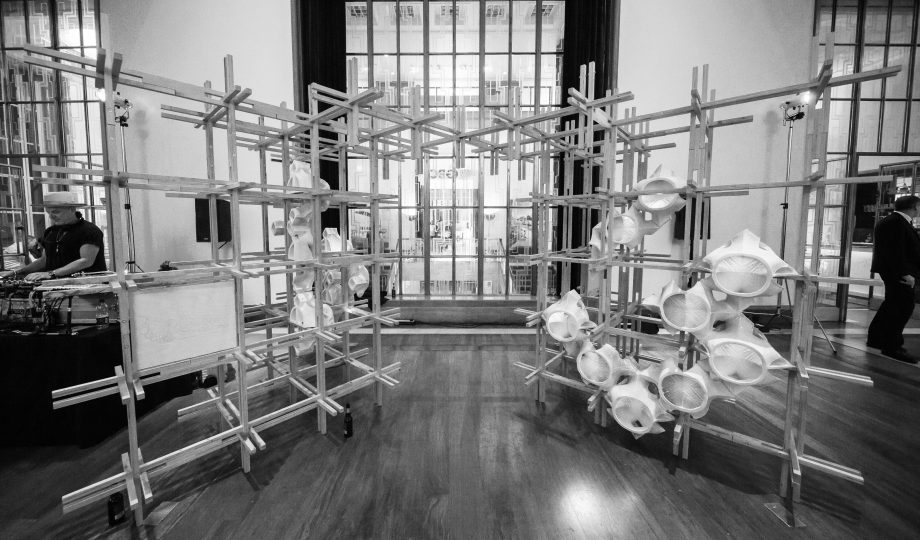 ‘Composite Assemblies’, an installation by architectural designer Clementine Blakemore, has been unveiled at an event to mark the UK Green Building Council’s (UKGBC) tenth anniversary.

Created through a partnership between practice and academia as part of a series of collaborative workshops, the 10th Anniversary sculpture embodies UKGBC’s principles towards a better built environment: efficiency, circularity, collaboration, cooperation and innovation.

Materially, the sculpture uses a simple palette of three materials: timber, steel and clay. UKGBC believes limiting material waste and resource consumption should become second nature in the built environment, and to that end the timber is re-purposed and the ceramic elements have been fabricated locally from British clay.

The piece is formed from a series of cubic timber modules, arranged in a cluster which can be walked through, to encourage gathering and interaction. With reusable fixings, this framework can be assembled, disassembled and transported with ease. The intentional simplicity of the timber structure sits in contrast with the complexity of the three-dimensional ceramic elements, which inhabit the modules. Developed in collaboration with a research cluster at the Bartlett School of Architecture led by Daniel Widrig and Guan Lee, these elements of the sculpture are at the forefront of experimental digital fabrication. The geometry of the ceramic forms was evolved using a six-axis robotic arm, and each piece was then slip cast to create light-weight and intricate volumes. In this way, tradition and innovation sit side by side, complementing rather than contradicting each other.

The sculpture was commissioned by UKGBC, and sponsored by Atelier Ten, Barratt Developments, BRE, Kingspan, Landsec and The Crown Estate, with additional in-kind support from Grymsdyke Farm. It is currently on display at The Bartlett School of Architecture, and next week will move to be exhibited at BRE’s Innovation Park in North West London. The sculpture will then go on to be reassembled in other sponsors’ premises, either as a single module or as a site-specific cluster; it is hoped that the life-span of the piece will be extended far beyond the anniversary event and that the ideas and principles behind it will continue to provoke discussion and thought.

“To mark UKGBC’s tenth anniversary, we were keen to commission a physical manifestation of the principles that underpin our purpose and mission. Clem’s sculpture beautifully captures the essence of sustainable design and construction in terms of efficiency, circularity, cooperation, collaboration and innovation. I hope that built environment professionals who view this piece will be inspired to think more proactively about how they can embed such values into their everyday work.”

“The piece seeks to champion the assembly or coming together – of materials, people, processes and ideas. Tapping into the innovative research taking place at the Bartlett has been really exciting, and it’s been a pleasure to engage with the sponsors and team at UKGBC”

Photos of the sculpture are available on Dropbox.

A video showing elements of the sculpture’s fabrication process is available to view and share here.

The ceramic elements were prototyped and produced at Grymsdyke Farm, an educational research and workshop facility in Lacey Green, rural Buckinghamshire, whilst the timber frame was made by local furniture fabrication team Studio Outfit, based nearby in High Wycombe

Having been involved in design workshops throughout the development process, lead sponsors were also invited to visit both sites during the fabrication process, to better understand the way in which the piece was made, and to meet the people involved.

On the occasion of the 10th Anniversary Celebration at the RIBA in September, the sculpture was assembled as part of a workshop involving employees from the UK GBC. In these ways, the piece celebrates the potential for skill-sharing and social interaction within the construction process.

UKGBC is an industry-led network with a mission to radically improve the sustainability of the built environment.

A charity with over 400 member organisations spanning the entire value chain, we represent the voice of the industry’s current and future leaders who are striving for transformational change.

We inspire, challenge and empower our members, helping them to identify and adopt the most sustainable, viable solutions.

We also engage our members in advocating a progressive message to government, informing and influencing policy.