Trevor Gaughan, Founder of Ecofill Technology, talks to UKGBC about what they do and what innovation means to them. 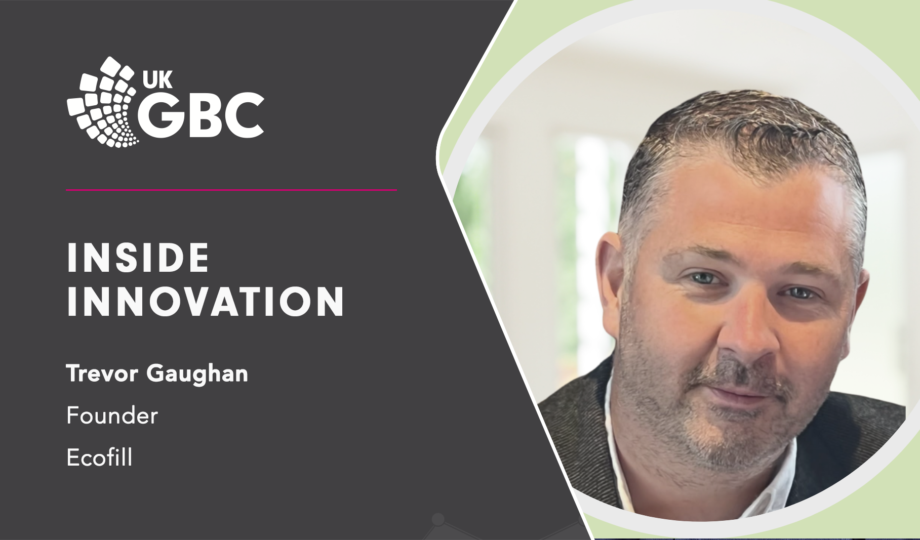 We define ourselves as an innovative, green technology that’s disruptive to the market and is decarbonising Britain’s infrastructure. We transform clays and subsoils onsite into structural materials that are used as aggregate replacement products. Traditionally, on any given construction project, thousands of tonnes of clays & subsoils that don’t have the structural properties to build upon are excavated and taken to landfill miles away. In their place, aggregates are imported on to site, laid and compacted. This results in a solid foundation on which the structures can be built. It’s the way construction and foundation earthworks have always been done because, until now, there has been no alternative.

The Ecofill process begins with a site investigation review, followed by a proposal and once accepted, we take samples from site for laboratory testing and from here formulate the Ecofill Binders to that specific project and ground type. Rigorous testing is carried out as per our Quality Management Plan and once complete, we mobilise our machines to site along with the binders and an Ecofill Production Supervisor.

Once on site, the clays & subsoils are processed through the Ecofill machine and combined with the binders at the pre-defined addition rate to produce the Ecofill products. Additional testing is carried out during the production phase also. If required, the client has up to 10 calendar days to take and place the Ecofill product from the stockpile to construct their earthworks or pavement structures. Laying and compaction is carried out using traditional compaction equipment and methods, and once compacted, the rapid curing process begins.

We have three main products, Ecofill 75 which replaces 6F5 or 6F2, Ecofill 50 which replaces Type 1 Subbase and Ecofill HD which replaces Concrete or Asphalt Base. The Ecofill structural materials are designed, produced, tested & validated to meet all the National and European specification requirements & performance levels for Highways & Earthworks and are fully tested by independent, UKAS accredited laboratories.

What we do is significantly reduce the need to export muck to landfill and to import aggregates. The huge benefits to that from a sustainability perspective is you no longer have thousands of wagon movements from your site to landfill and from a quarry back onto site. Compared to these traditional methods, Ecofill can reduce lorry movements and carbon emissions by over 98%. Reusing clays & subsoils on site is the key to reducing carbon outputs and cutting construction costs.

Using a carbon calculation tool, based on distance and a typical wagon that takes a 19-tonne load, we calculate the reduction of lorry movements, and subsequent CO2, Nitrogen dioxide, and PM10 we save for every project. A recent example, based on a residential scheme in Warwickshire of 200 homes, we demonstrated a saving of over 10,000 lorry movements trundling through the local village and almost 270 tonnes of Co2.

In addition to this, Ecofill is also, on average, 40% more cost effective for the client. Therefore, from both a commercial, decarbonisation and sustainability perspective it ticks all the boxes. People say we are literally turning muck into stone. Whilst technically this isn’t correct, I can’t really disagree!

Another offering to the Ecofill service is the non-corrosive construction and decommissioning of temporary structures such as haul roads and compounds which is ideal in the use of farmers’ fields, often used in this scenario. When the temporary structures are no longer required, traditional methods deem the land unusable as the nutrient and pH levels have been completely disrupted. Using our D-Ecofill method, all our binders are tailored specifically to each ground type and we know from pre-site investigation data what reagents are required to add back into the soil to return the ground to its original status. As a result, the field is then able to produce low-yield crops once more.

The final element to Ecofill is the treatment and remediation of contaminated soils, our R-Ecofill solution. There are 21,000 brownfield sites nationwide and given their prime locations, there is a massive push from the government to reinstate these much-needed sites. Developers typically avoid brownfield as it is commercially unviable. Our binders and technology not only transform clays & subsoils into aggregate replacement products but they can also be designed in such a way that we can treat the contaminated soil through the process of solidification or stabilisation. Contaminants will therefore either be encapsulated, have their leachability reduced to safe levels or become chemically changed therefore reducing toxicity or mobility. Yes, there’s more initial testing and more in-depth binder formulation required, but when you compare that to the cost savings, it’s a no-brainer.

How did your start up get to where it is today?

I have spent my career in both civil engineering and in quarrying and for years I have observed this antiquated, carbon intense system. Why are we taking material away from one site and bringing it in from another? There had to be another way to approach this. From here, Ecofill was born. It’s an amazingly simple idea even though the technology behind it is a lot more complicated. However, we know that it works. We test it regularly and vigorously. We even commissioned AECOM, the worlds trusted infrastructure firm, to write our Quality Management Plan.

We didn’t consider using hubs and accelerators often associated with start-ups. I think you’re at risk of oversharing. We felt that could be a little detrimental and we wanted to protect the idea until we got to a situation where we knew we were ready to bring it to market. I think it’s like that with a lot of innovators where they are protective over their idea. We have secured the innovation with a global patent protection, end-to-end IP securing the process & machinery, a registered trademark, and our binder formulations are under a fully protected, worldwide exclusivity agreement. I know that collaborating with others can help and spur things on, but at the time, it wasn’t right for us.

Something that is disruptive. There are lots of new products that come on stream, and they may enhance or slightly improve, but innovation is something that comes along and changes the game, flips it on its head. True disruption to the service that you are providing for all the right reasons.

On paper, the industry couldn’t get enough of innovation, then when you approach them it’s often quite different. There is a hunger, but when it comes to reality, there’s a resistance. This needs to change. We can’t continue doing the same thing and expecting different results. Decarbonisation of the built environment needs innovation.

Willingness to engage and truly invest in innovation. Everyone is so busy and if people actually sat down and took the time to engage with new start-ups and innovation, there would be a lot more opportunity for change. Larger contractors tend to have someone specifically in that supply chain role who are usually very keen. However, by the time that has funnelled down to the tech team it can often become less of a priority. To get somebody who genuinely cares about decarbonisation & innovation is quite rare.

One of them is funding and I think all start-ups can relate to this.

A second challenge has been dealing with some individuals who are not really open to innovation. From our perspective, one of our biggest challenges that we’ve come across to date is the local authorities who have been a little sceptical. However, this challenge is becoming easier due to our live demonstrations at the Ecofill Innovation Hub in Selby, North Yorkshire and by further reiterating that our products are produced to the National specifications for Highways and Earthworks which fully de-risks things for everyone.

Perseverance, to not expect everything to happen quickly. If you think somethings going to happen in the first year, realistically it will take two years. Build relationships, be consistent and have a strong plan, thrash that out. It’s not always going to work, but if you have a dedicated team, you will make progress. Surround yourself with the right people. You’re only as good as the team around you.

We’re at the cusp now, we have the product, we have the technology and we have the team. We are regularly showcasing the solution via trials and live demonstrations at the Ecofill Innovation Hub, the clients are ‘chomping at the bit’ for it. We are exhibiting and also giving a full presentation on Ecofill just this week at the Highways UK show at the NEC. The next step is to start producing multiple machines. Our plan is to produce 10-12 machines a year, depending on how we scale up. The short-term goal is 50 machines in 5 years, and the long-term goal is countless machines globally. We are reaching out to local education institutes from a talent perspective because we know there’s a gap and shortage in construction skills. We’ve given guest lectures at a variety of universities as well, where a lot of Tier 1 employees  go to upskill and improve on new methodologies. We’re also presenting at the Brownfield Research & Innovation Centre in a couple of weeks two.

We’ve recently appointed Dr Nigel Griffiths as Chairman of Ecofill and he is also a proud investor. Nigel has held various government roles including Deputy Leader of the House of Commons, ex-Trade and Industry minister, and more importantly a former Minister for Construction. As soon as we engaged with him, he completely got it. He understands the market, how massive the opportunity is, not just in the UK, but globally. The global aggregates market is worth $460 billon. With just 50 machines we’ll have 4.4% market share of the UK alone. The possibilities are ginormous for us here in the UK, and of course worldwide.