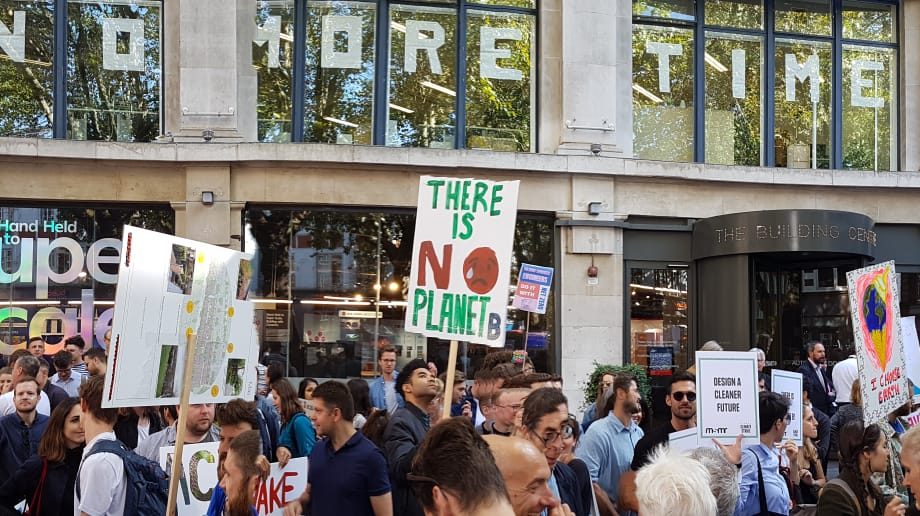 Update: We have collated a collection of professional images from the day, available here.

To change everything, we need everyone.

The UKGBC team have joined members, friends, family and millions of others around the world at the Global Climate Strike to demand urgent action from policy-makers and industry to address the climate crisis.

To change everything, we need everyone. That’s why we’re joining the @UKGBC at the #GlobalClimateStrike. We must demand urgent action to decarbonise the #buildenvironment. Join us and millions of others around the world to show your support. pic.twitter.com/Gr8tApXA1Q

Tomorrow, we will be swapping our pens for placards as we join the #ClimateStrike. We will march with the @UKGBC, LETI and many of our industry colleagues. By joining the youth strikers, we hope to demonstrate our commitment to #ArchitectsDeclare and fighting the climate crisis. pic.twitter.com/OpUs05xMk7

Looking forward to joining @UKGBC and friends 11:45 at @BuildingCentre to start the march to Millbank. Promises to be a big turnout from @burohappold https://t.co/CryQMy9OFy

Huge crowds have gathered at the Building Centre, London to hear from our Chief Executive @JHirigoyen

In London, the #property and built environment sector comes together (convened by @UKGBC) to demand tougher and more inspiring #ClimateAction. #ClimateStrike #GlobalClimateStrike pic.twitter.com/gjyfeGcHWo

Julie Hirigoyen CEO of @UKGBC addresses the #ClimateStrike outside the @BuildingCentre “We need to collaborate to make positive change” pic.twitter.com/2vBNkMwCvR

During her speech Julie officially launched our Climate Commitment Platform

Building on the momentum of the #GlobalClimateStrike we have unveiled our #ClimateCommitmentPlatform, an online tool designed to profile the headline commitments and #carbon targets of #BuiltEnvironment organisations. #FridaysforFuture #ClimateStrike https://t.co/EHlEDBroLq

We are also bringing our members together in our Local Area Networks in Birmingham, Bristol and Manchester.

We spoke to @UKGBC‘s director of policy + places @johnalker at the #GlobalClimateStrike in Manchester about the importance of today and how the built environment, which contributes around 40% of the UK’s total carbon footprint, can begin to reduce its impact on the climate pic.twitter.com/LRptFlsE96

Thank you for following our live blog of the #GlobalClimateStrike. We are signing off now to join the demonstration, but will be continuing the conversation on Twitter @UKGBC.

A selection of photos of the #BuiltEnvironment contingent at the #GlobalClimateStrike, gathering at the @BuildingCentre in #London. (Thread)