Andy Pyke, Commercial Director of Proofshield, talks about what it's like to be an innovator in the built environment. 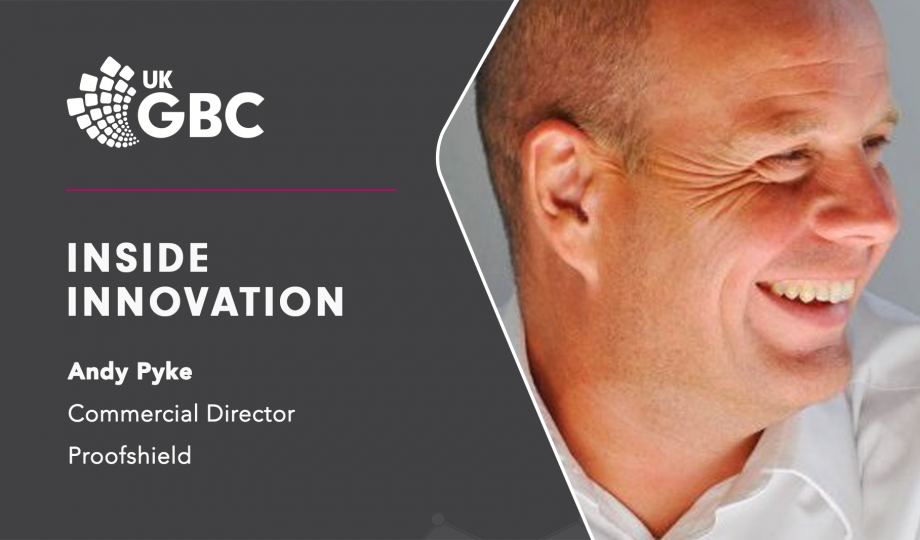 External render coatings on buildings have two primary functions; they are protective and decorative. The Proofshield product range adds an additional, valuable function, which is insulation. Our renders protect and look great, but they don’t stop there. They also reduce the heating and cooling load on any building, saving energy and reducing running costs.

How did your start-up get to where it is today?

We launched in 2018 with two years of development prior to that. The idea was born out of a nerdy interest in classical architecture and history – specifically Roman and Byzantine history. Having lived and worked overseas in earthquake zones, I was fascinated by how these buildings were able to endure incredible stresses which modern science now attributes to the unique composition of the so-called “Roman Concrete” used.

The second source of inspiration was born out of my experience in the renewable energy industry. It just seemed that we were often so focussed on the exciting renewable technologies that we sometimes overlooked the fact that the greatest energy savings and carbon reduction benefits were often the simplest measures such as insulation.

I couldn’t help but think that the thermal characteristics of some of these ancient materials still had a place in the modern world in the form of really simple insulating wall and floor coatings (renders and screeds).

Partnering with a friend in the aggregate mining sector, we decided to work together to see what we could do with these aggregates. So the root of the idea really was two friends coming together with precedents from history and some technical knowledge to try and create useful new insulating products for the modern era.

Cut forward several years and we have developed a range of insulating plasters, renders and screeds that are highly breathable and effective insulators that we now sell across the UK and in a handful of export markets

Innovation happens in all sorts of ways. Sometimes it’s driven by absolute necessity, for example the climate crisis. I think there is also another type of innovation that comes out of having the mental space and capacity to do something new. For me, the impetus to innovate is driven by curiosity and having the space to creatively indulge that curiosity.

At a thought leadership level – such as UKGBC and in larger public bodies – there is interest in new ways of doing things. Then there are big organisations that can see value in innovation. However, right down at the other end, the end I am at, there is resistance to change in the supply chain and amongst tradespeople and contractors.

I understand the reasons why – why take the risks on new products when for the past ten years you have walked into the same store and bought the same products? I can go and speak to those stores, which is what I have been doing. However, they say their stores are not there to sell ideas, they are there to sell what people ask them for. People don’t walk in and say what’s new today, talk to me about your innovations. Therefore, I would say at a grassroots level it is not particularly open to innovation.

Influence. Finding the right partnerships and bringing the right people together is really powerful. I have a product that isn’t just a wild idea, it is proven, and I know somewhere out there, there is a large company that will want to power innovation and partner up. But where do you meet these people? Somewhere there is a match for everyone, like a match.com for businesses. We need speed dating for innovators and businesses.

With more resources I could influence more people and go faster. With the resource I have it is a case of doing the best I can, and speaking to as many people as possible. With more resources things can gain their own momentum and you become an accepted brand in the market. To give an example, 3rd party accreditation that is seen as the stamp of approval for your products to be widely accepted could cost in the region of £80k. Who can afford that without major inward investment?

Don’t do it alone. If it is just you and you’re having a bad day, then it’s a bad day for the whole company. You need to work with people that have a different skillset to you, you need balance in your team.

We have now developed our next new product. It is a through-coloured render; all singing, all dancing. As well as being affordable and good value, it has market-beating performance parameters. Up until now our products have been focussed on the retrofit insulation market but this new product range can be used across all sectors of the built environment.

For my company, the next step is the launch of this mainstream product range, but this will only realistically happen with an investor coming alongside.