UKGBC confirms appointment of Chris Oglesby and Estelle Bailey to its Board of Trustees. 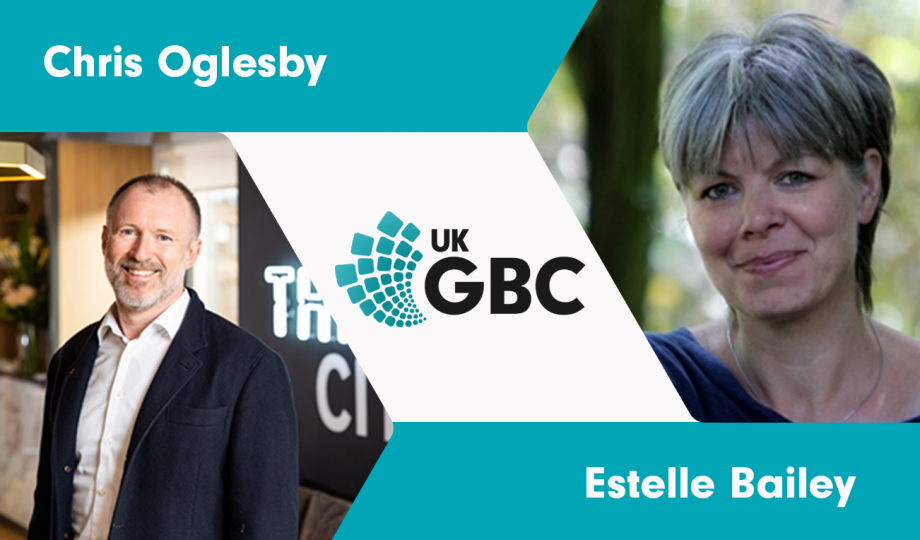 Having held his position of CEO since 1999, Chris Oglesby will bring over 20 years leadership experience to UKGBC’s Board of Trustees. During that time Chris has overseen the growth of the business to one that now owns over £1bn of commercial property across the city regions of Manchester, Liverpool, Birmingham and Leeds; drove forward Bruntwood’s commitment to creating thriving cities; and signed Bruntwood up to become one of the first UK signatories of WorldGBC’s Net Zero Carbon Buildings Commitment. Chris has also played an active role in many public and private sector partnerships for Bruntwood including, Manchester’s Oxford Road Corridor, Manchester Climate Change Forum, the GM Local Enterprise Partnership and is a board member of the Northern Powerhouse Partnership.

Estelle Bailey has been an authoritative advocate of 20 years for wildlife and the natural environment, and joined BBOWT in January 2014 after multiple years working in nature conservation with other Wildlife Trusts. As Chief Executive, Estelle leads on the delivery of the Berks, Bucks & Oxon Wildlife Trust’s Strategic Plan 2016 – 2021: Be part of nature’s recovery, as well as oversees the sustainable development of the Trust to meet new challenges for wildlife.

Sunand Prasad, Chair of the Board of Trustees at UKGBC, said:

“I am thrilled to have Chris and Estelle join UKGBC’s Board of Trustees. Both will bring a wealth of leadership experience to UKGBC’s board. Their strategic counsel will be invaluable in guiding UKGBC’s ambitious programme of work, and supporting our mission to ensure that the built environment sector plays its part in meeting the urgent challenge of the climate emergency.

With COP26 just around the corner, our industry has a critical opportunity to demonstrate to an international audience that we stand ready to facilitate the widespread adoption of sustainable and regenerative solutions not only to avert the worst impacts of global heating but to create an all-round better, greener and more liveable built environment. My fellow Trustees and I look forward to working with Chis and Estelle closely over the coming months and years as we take on this challenge.”

“I am honoured to be joining the UKGBC’s Board of Trustees and supporting their commitment to creating a better built environment. This is a crucial time for our industry and I am wholly committed to the progressive and sustainable change so sorely needed to improve our environment. I truly believe that by championing collaboration and being driven by purpose, we can create places that enable people and our planet to thrive.”

“I’m thrilled to be joining the Board at UKGBC as it embraces an exciting vision that places greater importance of building with nature while continuing to champion the transformation of the built environment, as well as making green buildings the norm in tackling multiple environmental issues. UKGBC is a solutions focused organisation with the expertise to lead change for people and planet.