BLOG: UK Contractors Declare – A manifesto for a just transition to a zero carbon economy 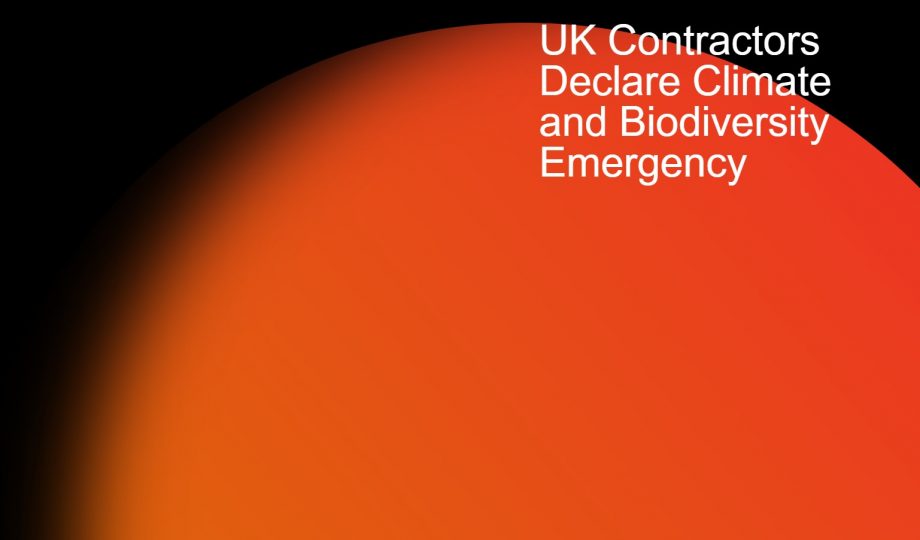 In June 2020, a number of leading construction contractor organisations, representing £15Bn+ of annual turnover, declared a state of Climate and Biodiversity emergency. They are calling for more contractors to join them in working towards net zero carbon and to sign up at contractorsdeclare.co.uk.

By signing up to the declaration, organisations commit to 11 principles regarding the way they will work with their employees, their clients, design teams and supply chains for net zero carbon buildings and a net zero carbon economy.

They also join a movement within the built environment that has been gathering pace ever since late  2018 when the Intergovernmental Panel on Climate Change (IPPC), consisting of 90+ global experts, published its report warning that humanity only has until 2030 to prevent catastrophic levels of climate change. A climate spiralling out of control means hundreds of millions of victims around the world and the end of the world as we know it, in terms of global economic equilibriums, natural landscapes, biodiversity and building design.

This sobering fact prompted a reaction from business- and citizen-led groups, cities and countries to declare a state of climate and biodiversity emergency in order to drive urgent action.

This movement has contributed significantly to help to change practices’ mindsets, as a recent Architects Declare survey has shown. Now, contractor businesses including Multiplex in the UK are supporting the movement too, joining forces with their peers and their value chains in the built environment.

In launching UK Contractors Declare with our peers we have sought to make a pledge for specific action, building upon the previous declarations with the aim of targeting net-zero carbon emissions. We made our pledge specific by referencing the use of standards for limiting global warming to 1.5°C, as well as the UK Green Building Council’s (UKGBC) definition of net-zero and the World Green Building Council’s call for all new buildings, infrastructure and renovations to have reduced embodied carbon by at least  40% by 2030 and all new buildings to be net-zero operational carbon .

In fact, discussions for the UK Contractors Declare manifesto first began within the UKGBC Contractors Forum where, in conversations with my peers, the idea quickly gained momentum. A number of leading contractors had already set goals for decarbonisation, including the adoption of the UKGBC’s Net Zero Carbon Buildings Framework and the World Green Building Council’s Net Zero Carbon Buildings Commitment. However, we recognised that the majority of the market had yet to make a net-zero commitment.

Through creating a joint declaration that was specific to construction contractor organisations, with a breakdown of the actions and standards that would enable a net-zero carbon economy, we aim to inspire all contractors, including those on the early stages of their sustainability journey, to sign up and unite behind this common goal.

By giving contractors a collective voice on the climate and biodiversity emergency, Contractors Declare is also intent on giving the supply chain, designers, and ultimately clients, clarity on the contractors’ ambition to achieve net zero.

Such clarity is important as it enables policymakers to accelerate the formation and implementation of policies for goals that may have been previously thought to be unachievable.

Working as part of the wider global “Construction Declares” movement, Contractors Declare is already engaging with Architects Declare and Engineers Declare to avoid duplication of activity and help promote a joined-up and strategic approach to combining resources, lobbying government and driving meaningful and effective change.

In this difficult time, with the Covid-19 pandemic having serious implications across the globe, the declaration reinforces the message that any stimulus and mobilization of resources needs to have the net zero carbon economy as the ultimate goal and green jobs as part of the pathway for economic and social prosperity.

To find out more and sign up, please visit:  contractorsdeclare.co.uk