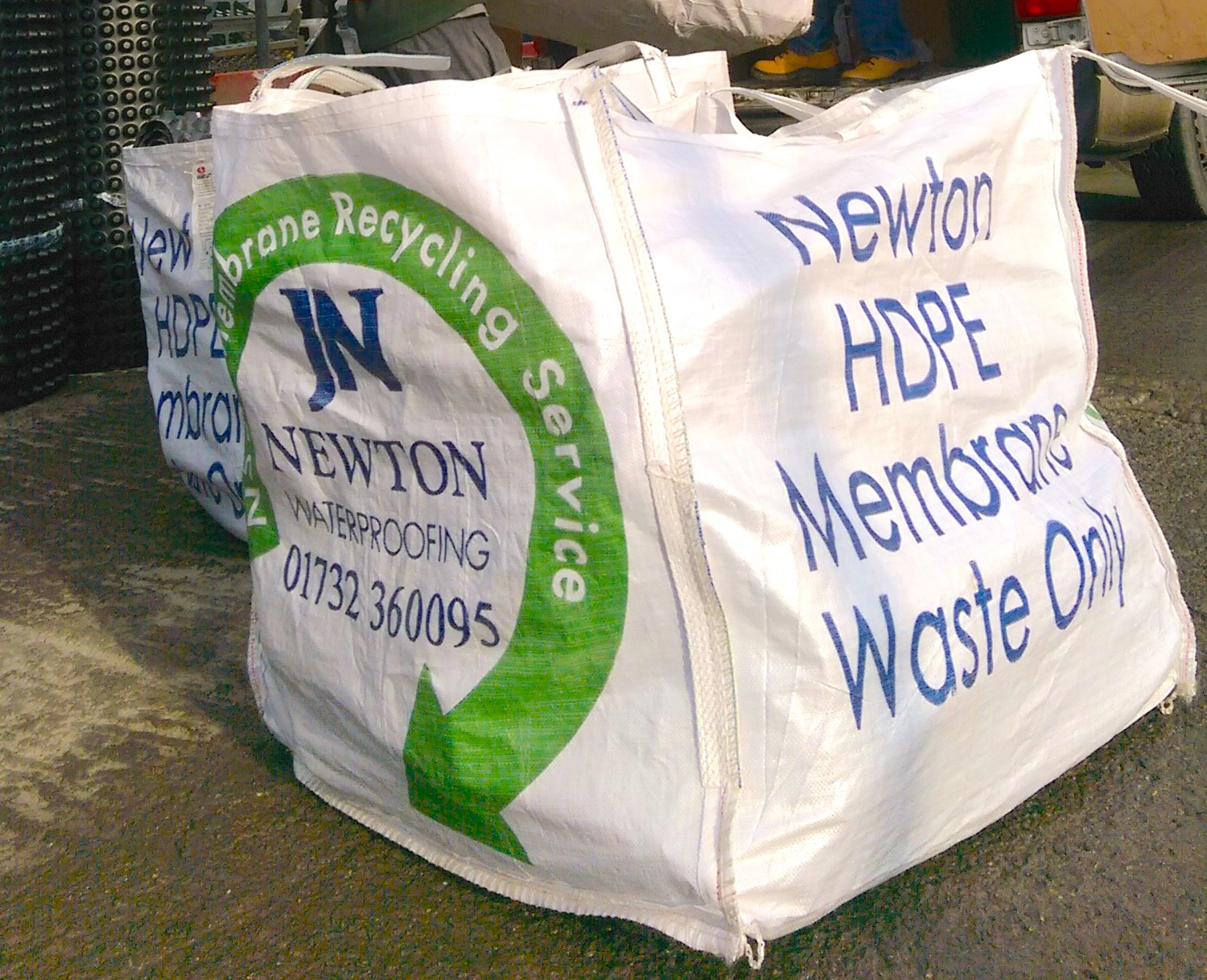 The first closed-loop recycling scheme in the UK waterproofing industry.

The Newton Recycling Service is the first and only recycling service in the UK waterproofing industry, which has not only significantly reduced waste generation from products but has also focused attention on the responsible sourcing of materials and implementing other waste-reduction practices within the business.

Logistically, the service works by collecting waste off-cuts of HDPE membrane from Newton’s nationwide network of Specialist Contractors on delivery backloads, whilst generating zero additional emissions. The material is then processed at Newton’s Kent headquarters before sending it for recycling into new construction products.

Perhaps one of the most significant features of the recycling service is the fact that it is entirely traceable. Every kilogram of plastic that is returned to Newton is tracked so that it knows where all waste material is coming from. As a result, it can produce recycling reports for any participant in the supply chain, from direct customers to architects, contractors and developers, telling them exactly how much they are recycling, even down to individual projects.

In the installation of cavity drain membranes, Newton estimates that as much as 5% of the material goes to waste in the form of off-cuts and leftover material that is usually disposed of as general waste, meaning it will normally be sent to landfill. To put this into context, in 2019 Newton sold 206.76 tonnes of HDPE membrane, which would equate to approximately 10.34 tonnes of plastic going to landfill from Newton products in just one calendar year. Instead, in 2019 Newton recycled 5.174 tonnes of membrane, which is already 50.03% of that potential figure.

Although it is still in its relative infancy, the Newton Recycling Service has the capacity to completely solve this plastic problem, and our ambition is that eventually all plastic waste from Newton cavity drain membranes will be recycled. Newton quantitively measure the success of the recycling service by tracking how much plastic is being returned, and equate this into several other statistics that help to put the impact of the service into perspective.

Newton’s aforementioned network of specialist contractors across the UK represent approximately 80% of annual sales and are the group who benefit most from the service. Because Newton supplies each contractor with regular reports summarising their recycling, they are becoming increasingly aware of how much waste they are producing. Consequently, many contractors have reported that they are investing more in training their installers to be more efficient in using their material resources. The results are evident in the data, with one contractor reducing the amount of plastic being sent for recycling from 8.50% in 2018 to 4.61% in 2019. Considering that this customer purchased 8.8 tonnes of membrane in 2019, a waste reduction of nearly 4% represents a significant decrease.

HDPE cost varies, but since 2017 it has been approximately £175 per tonne. The service is a not-for-profit scheme, and all profits are donated to UK marine conservation and campaigning charity Surfers Against Sewage (SAS).

Newton’s relationship with Mace began in 2015, when Newton won the right to supply one of London’s largest below-ground developments. However, it was in 2017, when the recycling service was introduced, that the relationship became a sustainability collaboration. For example:

This level of exposure at the top tier of UK construction would not have happened without the recycling service, and Newton are continuing their sustainability collaboration with Mace on further projects.