Joanna Clarke, Head of Design at the Active Building Centre, provides an instructive case study in to the development of their energy positive Active Classroom.

SPECIFIC is an Innovation and Knowledge Centre led by Swansea University which, working with partners such as Tata Steel, is developing a new concept for buildings of the future – ‘Active Buildings’, which use solar energy to generate both heat and electricity from the building envelope, and store this energy in batteries and thermal stores for use within the building. The Active Classroom was constructed in 2016 to demonstrate the latest renewable energy technologies being developed at SPECIFIC and by collaborative companies, such as Building Integrated Photovoltaics (BIPV) in the roof and windows, battery storage, a novel resistive underfloor heating system and solar-thermal heat generation. It was designed to be energy positive – generating more energy than it uses over an annual cycle.

The form of the building was chosen to maximise the south facing roof area, which is entirely covered with a 17kWp array of novel BIPV roof sheeting, while also allowing the introduction of north light windows to maximise natural daylight within the spaces and encourage air flows thorough the building for natural ventilation. Electricity generated by the BIPV roof is stored in two aqueous hybrid ion batteries, providing 60kWh of electricity storage – enough to power the building for a few days. 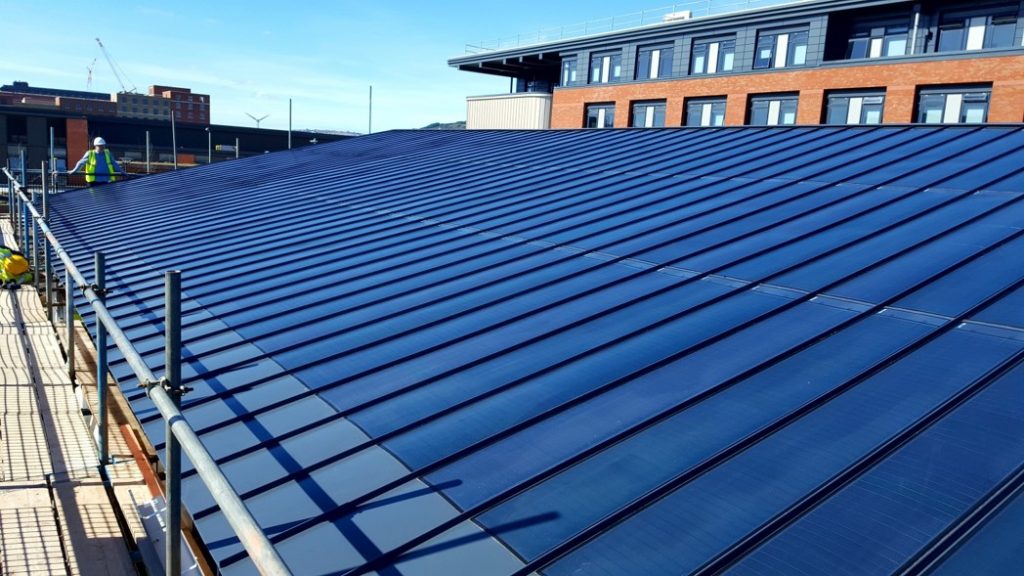 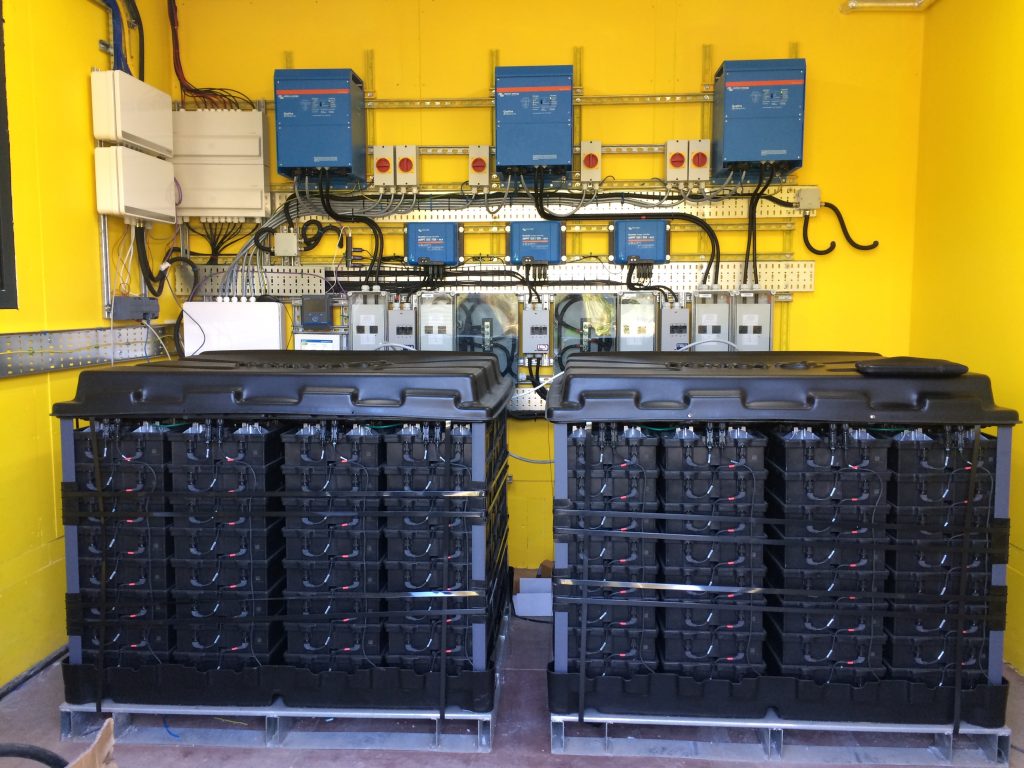 The south elevation incorporates two transpired solar air collectors (TSC) which generate warm air, for space and water heating within the building. The warm air from the collectors is distributed in two ways – one via an air source heat pump (ASHP) to provide space heating and supply the hot water system; and one supplying fresh air directly to the classroom space via a mechanical ventilation and heat recovery (MVHR) system.

Both the heat and electricity generating technologies work together as one optimized system due to the bespoke building management system (BMS) created for the classroom. This enables the system to work as a whole, rather than as individual parts and enables the technological components to work together in the most efficient way possible. 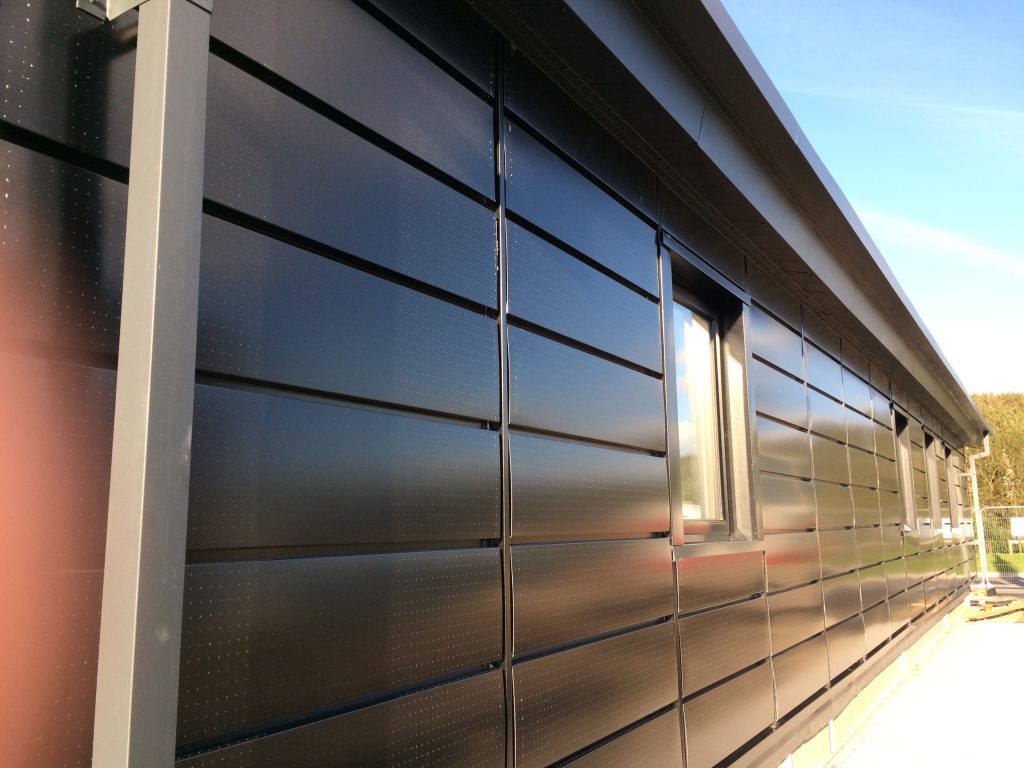 The transpired solar collector on the south elevation 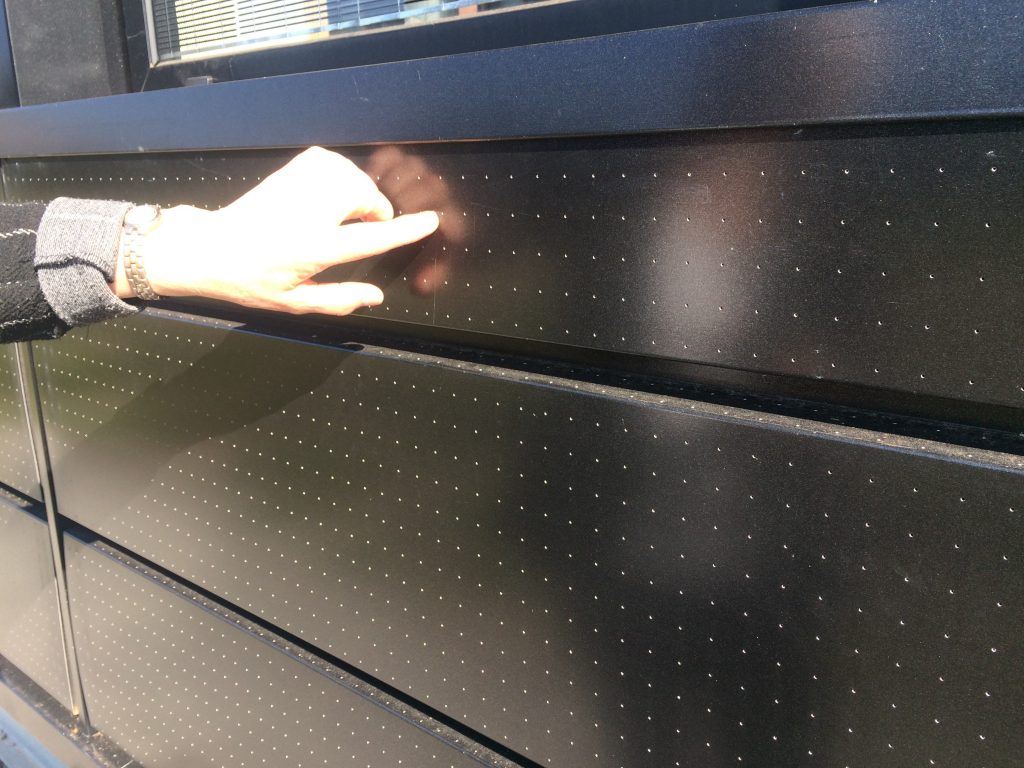 Through a combination of modelling, based on data from an on site pyranometer, and performance data from the building, we have been able to show that the building can produce 1.5 times the amount of energy it consumes over an annual period. This equates to approximately 5.5MWh of spare electrical energy, sufficient to enable a Nissan Leaf to travel approximately 25,000 miles.

As well as being a living demonstration building capable of proving new technology and concepts, the Active Classroom is regularly used for teaching and meetings, ensuring that its energy demand is realistic. 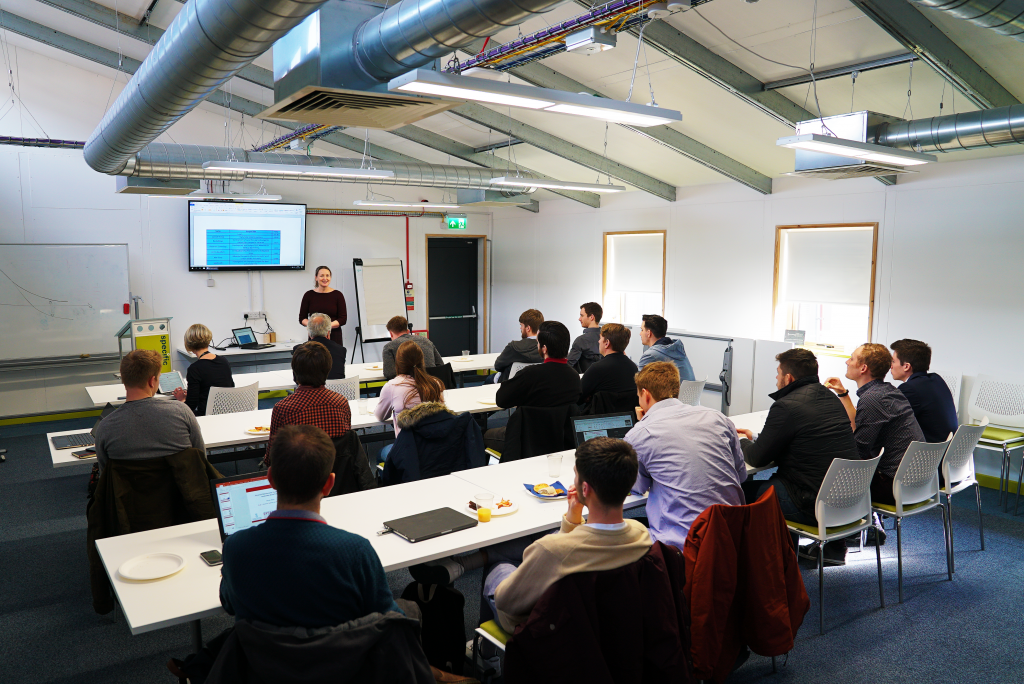 Active Classroom room in use

A living wall on the east elevation showcases a collection of native species present in the adjacent Site of Special Scientific Interest (SSSI) and some of the plants are being transplanted around the campus and within the SSSI to boost the decreasing number of certain species, such as Sea Stock. It also provides a visual feature elevation and has helped engage people with the building highlighting the connection between the built and natural environment. It has been particularly successful in helping to engage young people in the work being undertaken at SPECIFIC. 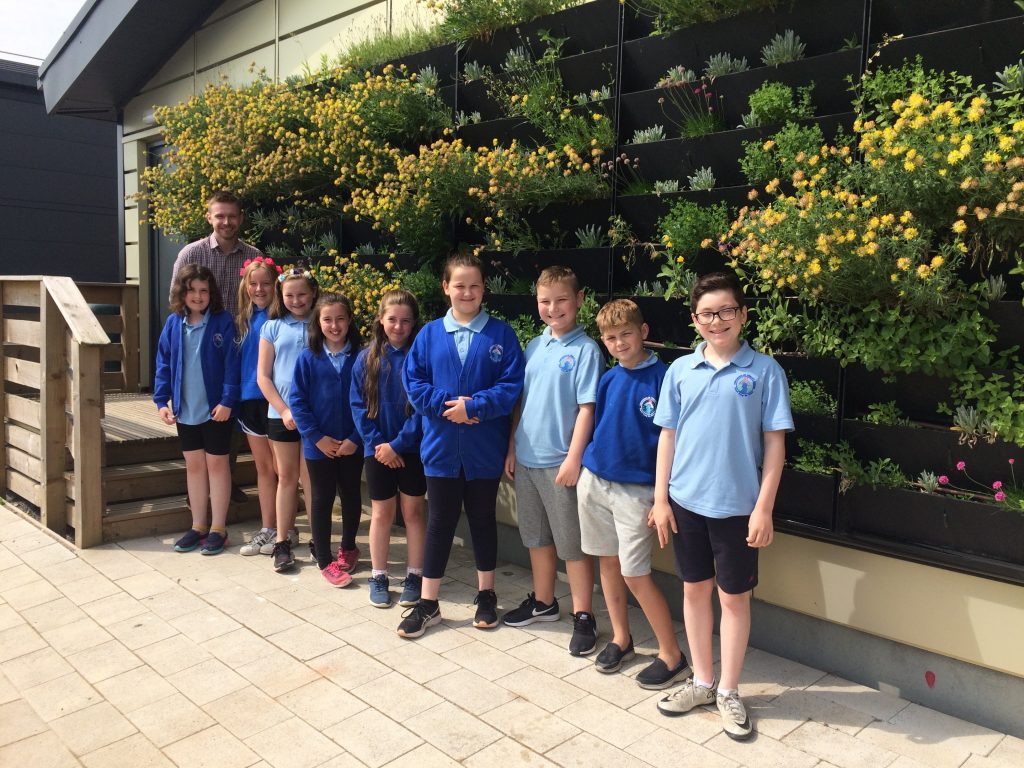 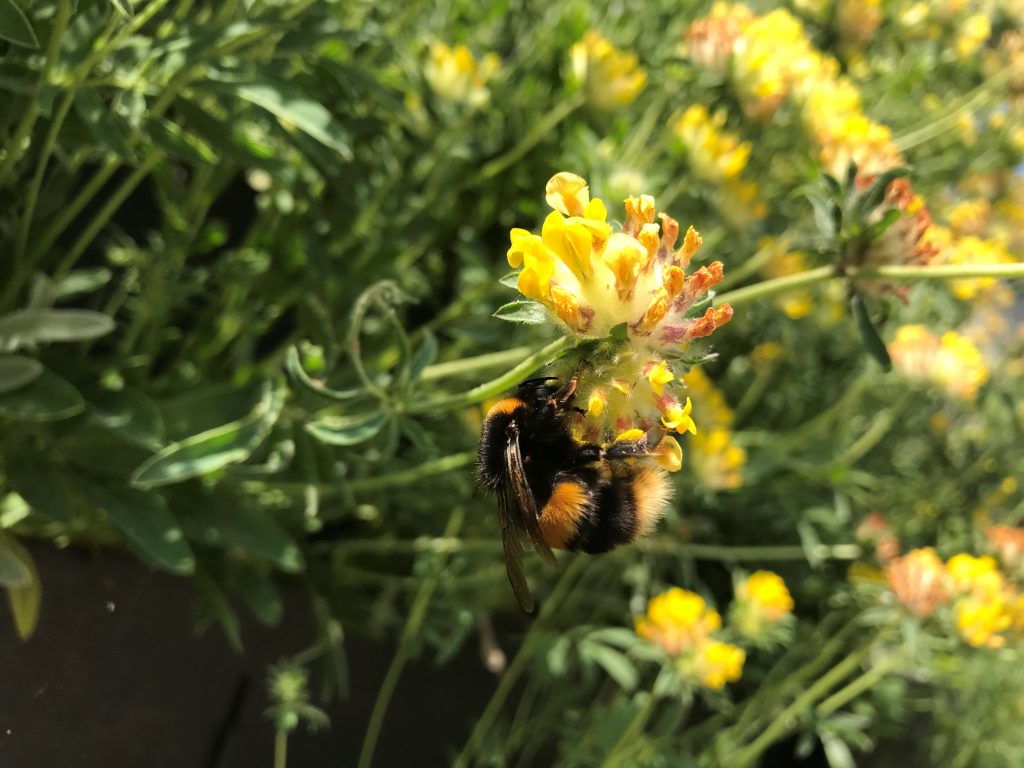 Working with our industrial partners

The SPECIFIC Innovation and Knowledge Centre is led by Swansea University in partnership with strategic industrial partners Tata Steel, Akzo Nobel and NSG Pilkington. It is funded by the Engineering and Physical Sciences Research Council, Innovate UK and the European Regional Development Fund, through the Welsh Government.

In addition to the innovative renewable energy technologies used to create the energy positive building, the Active Classroom showcases some innovative products supplied by one of our main industrial partners – Tata Steel, who also provided some sponsorship towards the building. These products, which are all certified to BES 6001 Responsible Sourcing standard, externally include Colorcoat Renew SC® transpired solar collector on the south elevation; Trisobuild® plank profile walls in their new 3 layer Colorcoat Prisma® pre-finished steel and Colorcoat Urban® as a roof system providing the substrate for BIPVCo’s integrated photovoltaic modules on the south-facing roof. Internally, Tata Steel supplied Coretinium®, an innovative smooth, magnetic surface for internal walls; and Colorcoat Prisma® was also used as the base for the heated floor system designed and manufactured by SPECIFIC at our Pilot Manufacturing Resource Centre (PMRC) in Baglan.

In addition, Tata Steel facilitated new partnerships within the project. Through their open Innovation Portal, for example, they identified a SME who had developed a steel-framed composite panel with a unique 3-D locking system that allows rapid construction (and de-construction) of the basic building frame. The high risk decision to utilise this system, which had never been used on a building of this size before, was made by SPECIFIC and facilitated through Tata Steel – the aim being to assist the SME in establishing themselves in the construction industry and identifying ways to evolve their product to suit construction of projects of this nature. A number of the lessons learned regarding the system and the build process are being evaluated for inclusion for any future iterations of the framing system.

The Active Classroom also houses the first PV window developed by another of our industry partners, NSG, allowing us to test and evaluate the performance of the window, as well as the installation methods and to gain feedback on the aesthetics to inform the product development, provide real data on its performance and enable feedback on the coordination of the PV window electronic design and the overall building physical design.

Since its completion in September 2016, we have been thrilled to win several high-profile awards within the construction industry. These include Constructing Excellence in Wales (CEW) Award for Innovation in 2017; and Royal Institute of Chartered Surveyors (RICS) Wales Award for ‘Design through Innovation’ and ‘Project of the Year’ in 2018; as well as a Wales Green Energy Award, and a Local Authority Building Control Award. 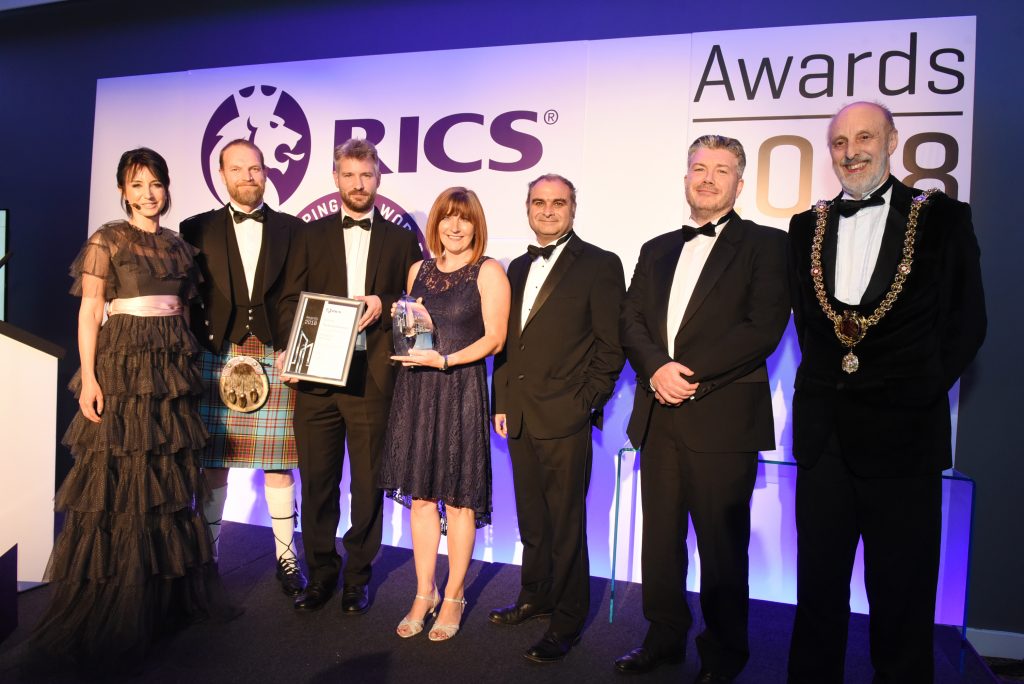 Winning ‘Project of the Year’ at the RICS Wales Awards.

These awards are hugely important to us, as they help spread the word about the innovative work being undertaken at SPECIFIC and encourage others to follow the example. Since constructing the Active Classroom, SPECIFIC have been involved with a number of other pioneering schemes, one of which is Active Homes Neath – a £3.3m flagship housing project for the Homes as Power Stations element of the Swansea Bay City Deal, utilising the ‘Active Building’ concept – which is receiving funding from the Welsh Government Innovative Housing Programme and from BEIS through the Building for 2050 programme. The main aim of this project is to reduce fuel poverty for the tenants of social housing association, Pobl Group.

The Active Classroom was also instrumental in securing £7m of funding from the Global Challenges Research Fund set up by RCUK for a project led by Swansea University and involving 12 UK and Indian universities, to build five self sufficient solar powered buildings in remote Indian villages.

And, finally, in October 2017 Innovate UK (one of SPECIFIC’s main funders) awarded £800,000 of funding to construct a second building – this would be a 2-storey office next to the active classroom, known as the Active Office, which was completed in June 2018.

The Active Building Centre, which recently received £36m of funding through the Industrial Strategy Challenge Fund and UKRI, will seek to remove barriers and accelerate market adoption of new solar powered building designs, like the Active Classroom and the Active Office.